Well my journey into photography began when my father gave me my first camera a Kodak 110 Instamatic. 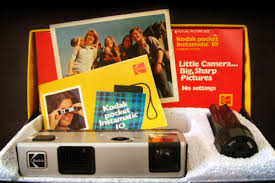 It was a great little compact camera.  The film… yes film was tiny and in a plastic enclosed spool bobbin thing that you just slid into the back side of the camera

and you didn’t need to manually roll it onto a spool.. that was good as I was only seven at the time.

Later on, I would remember positioning, well posing my younger siblings in our garden trying to figure out how to take the best photo, and so this began my adventure in photography.

Through the years my trusty 110 Instamatic took many photos and I recall my father always complaining when I had another roll to develop. We would drop it off at the local drug store and then wait.. yes wait for a number of days before our prints returned and we got to pick them up.

My father would go through them and humm and haw about my decisions on the photos I took, handed me another roll of fresh film and say.. take it slow and dont’ take so many pictures of the same things next time. You see my Father was not a photographer but he did enjoy taking photos too.  We had to watch our funds so I would think more about the photo I was taking before I pressed the button.

When I got into my early teens my father let me use his older 35mm camera.  This was neat, but it was not as easy to load film into as my little 110.  You see my fathers camera you would pull out a bit of the leader from the 35mm film roll and slip it into the receiving spool and then carefully slide the film roll and the spool into the bottom of the camera and the emulsion side of the film would be over the camera shutter so that when you pushed the button it would expose the film and you would receive a negative image once the film was developed.

Later into my high school years I volunteered to be the Yearbook photographer.  I was in charge of taking black and white photos with an old heavy Canon film camera. Taking photos around the school of the students I usually had to be a bit sneaky to get them as a lot of students did not want their photos taken. This began my journalistic photography journey.

The school saved money on buying film so they purchased their black and white film in bulk rolls of 100 photos and we, the photography team, loaded the film into re-loadable film cartridges to be used in the cameras.

After graduating from high school my interest in photography continued and I was eventually able to purchase my own very first used 35mm film camera, a Pentax ME. 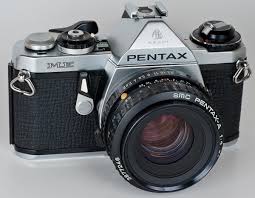 It was exciting to have my own camera and it travel along side of me.  I cannot count how many rolls of film I took with that camera and I still have it tucked away at home somewhere.

Early on after I had completed school, I began to get infatuated with photographing the moon and sunsets, I have mountains of film envelopes filled with numerous locations and their sunsets.

2 thoughts on “Where my photography adventure began”